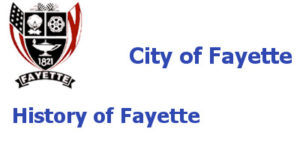 A Brief History of Fayette

The first recorded visit to the Fayette area was by the explorer Hernando DeSoto and his band in the year 1540. He traversed the Sipsey River, Coal Fire Creek, Bear Creek, Buttahatchee, and Luxapalilla Creek as he passed through during his search for gold and treasures. From that time it would be over 250 years before the northwest Alabama area would be visited by settlers.

Although there were a handful of settlers and traders in the Mississippi (Alabama was not yet a separate territory) area in the early 1800’s it was not until after the Battle of Horseshoe Bend in 1814 that the area opened up to a large number of immigrants. The small town that grew up in what became northwest Alabama was first known as Lafayette in honor of the French Revolutionary War hero. This was situated at present day Old Town, what is now known as Five Points. Lafayette was the first of several names the small town was known by as it gradually grew and moved with the business center. On January 15, 1821, the town was incorporated as Fayette Court House. The first name change was due to their being several other towns in Alabama with the name Lafayette.

Nearly four years after the incorporation of the town , the Alabama Legislature created Fayette County on December 20, 1824 from parts of Marion, Pickens, Tuscaloosa and Walker Counties. Like the town of Lafayette, the county was also named in honor of Marquis de Lafayette, who was touring Alabama at the time.

The boundaries of the new county would be changed several times over the next 50 years but the centrality of the town of Fayette had been established by an act of the State Legislature on January 12, 1826, when it approved for the location of a seat of justice. A town was to be laid off and lots sold to the highest bidder. This new town developed around Fayette Court House.

The first mail route (single rider and horse, with one mail per week) to serve this area was established in 1818. The route was from Tuscaloosa, through Marion County and on to Columbus, Mississippi. The first post office in the county was in Fayette Court House in 1826. In 1828 the U.S. Post Office listed Jesse Vanhoose as the postmaster of Fayette Court House.

Two days after it gained statehood in 1819 the legislature created the first highway project when it authorized the construction of the Byler (Toll) Road, which was completed through the Fayette area in 1822. This was built to link Tuscaloosa, a growing and prosperous city, to the Tennessee Valley and on to Nashville. Over this road the citizens of Fayette gained access to outside markets for their labors.

The first census of Fayette County, taken in 1830, counted 3,547 inhabitants. With the removal of the Indian nations from central Alabama making it safe to settle in new lands and the massive migrations from Europe to the United States, this would more than triple over the next thirty years. The lure of cheap land with a reputation for high productivity attracted many people from the older states where over-farming had depleted the land.

The decade of 1860 including the Civil War with the following collapse of the economy and its aftermath, proved to be one of great difficulty for the residents of Fayette as it lost nearly half its population. The hardships the people endured would last until the next decade when the town and county again began a steady growth for the next fifty years.

One of the greatest events in the history of Fayette County was the coming of the railroad. Aside from a much needed connection with the outside world, the railroad brought a change in the location of the town. The railroad did not go through Fayetteville as the people wished but was built one mile south of the town. S.G. James, the man in charge of building the railroad, informed Fayetteville residents that he would run the line through the town for an extra $1,000. Thinking the railroad would run through the town anyways, the money was never raised and so the tracks bypassed the “Old Town”. Fayetteville residents mockingly called the area through which the railroad ran Frog Level, because of the low, flat terrain on which water stood after a rain. As the business district gradually shifted toward the new train depot it was called Fayette Depot Town or Frog Level. Many people were not happy to move to this low-lying swampy area but that did not prevent crowds of curious spectators came to see the first train go through in May 1883. The train was a great source of pleasure as well as convenience. Citizens of the town made daily trips to the depot to meet the incoming train.

Now that the town was mostly known as Frog Level, a post office of that name was established there. The second postmaster at Frog Level changed the name to Alfreda in honor of his wife, while the third changed the name to Icy, his daughter’s name. On July 13, 1891, after filing the necessary petition and holding an election the town became known as Latona. The last change in name took place on November 8, 1898 when Latona was changed to Fayette and so it has been to this day.

One of the greatest misfortunes to strike the town of Fayette was a fire that swept through the business district in 1911. It was on Friday, March 26, at 6 A.M., when fire was discovered in a drug store. Fanned by a brisk wind, the flames spread rapidly over the town. In a short time businesses were in ashes. The court house stood in ruins and several buildings were smoldering in charred heaps. Townspeople, who formed a bucket brigade, were credited with saving a part of the residential section. Losses other than the court house (the third Fayette County Court House to burn) were the jail, bank, newspaper plant, twenty-three business houses, and seven residences. There were also several minor injuries reported.
Fayette had once more lost all its records of births, marriages and other documents of historical importance.

Like many other cities that have suffered devastation from fires Fayette rebuilt and used the experience to prevent future cataclysms from fire by passing an ordinance requiring new buildings to be made from block or masonry. Within a year a new majestic court house was built upon the grounds of the old one while businesses returned and erected many of the buildings that still form much of central Fayette. This intense building activity created many jobs and an atmosphere of opportunity that prepared Fayette to grow.

Following World War I, the 1920’s proved to be a time of industrial growth that established many jobs that would support the town for the next fifty years.

Alabama Power came to Fayette in August 1925 after buying a local company and receiving a franchise from the city in September 1924. Today it maintains a regional crew headquarters and warehouse on the north end of the city.

Branyon Oil opened for business in 1927 and still provides oil products to the people of the area.

Fayette Hatchery was started by WL (Wash) Rasberry about 1928. He made several significant contributions to the poultry industry before selling to Roy Couch, who continued the expansion of the business.

Fayette Cotton Mill came into existence when Alabama Mills constructed a facility in 1928. It once employed over 350 people until the decline of the textile industry.

Mr. & Mrs. VS Patterson perfected their recipe for Golden Eagle syrup in 1928. The brand is still widely available throughout Alabama.

Even the Great Depression could not dissuade EA and HB Bagwell from starting Fayco in 1938. Fayco became a regional supplier of concrete and corrugated pipe and at one time it was the largest user of US Steel culvert sheet in the nation. It was eventually sold to ST Bunn.

Fayette gained its first hospital in 1936 when Dr. B.W. McNease raised the funds needed and gained accreditation. Fayette Medical Center is now a 61 bed and 122 bed nursing home as a part of the Druid City Hospital.

The end of World War II brought many changes to Fayette but the industriousness and creativity of Fayette’s citizenry continued. Richard Arthur Field opened in October 1946 to provide air service and Flav-O-Rich Dairies came into being the same year by the hands of AJ Huffman. It eventually expanded to nineteen counties in Northwest Alabama before being purchased and eventually becoming a part of Borden. In 1947, RC Cobb bought two theaters from his mother and began an expansion that eventually spread across the Southeast until it merged with Regal Cinema in 1997. In 1954 Fayette Manufacturing Company opened and grew to over 500 employees before the textile decline in the 1990’s. Today Ox Bodies, founded in 1972, continues that tradition as it has grown to become part of TBEI, Inc.

Fayette has also seen it share of expansion by outside companies when they discovered the plentiful work force and skills developed by area workers. Arvin, in 1964, established a 100,000 square foot manufacturing facility that eventually expanded to nearly 300,000 square feet and over 700 employees. Over the years other corporations in many industries have discovered the work ethic of Fayette’s people provide a good place to locate.

Albert P Brewer State Junior College was opened in 1969 to provide the beginning of college courses at the local level. It currently encompasses four campuses providing a broad spectrum of college courses and technical skills. Now called Bevill State Community College, it prepares students for admission to all major universities in Alabama by offering courses that will transfer to their curriculum.

The citizens of Fayette continue to take advantage of the opportunities of the times. The city has recently invested in the Fayette Manufacturing and Innovation Center as a means of assisting small start up companies in their initial stage of development.

Today Fayette is still a thriving town with a pride in past accomplishments and a sense of confidence of the future based on those past efforts handed down by the founders and continued to this day.